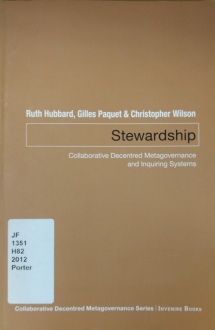 Debates over government are a time-honoured human tradition. Whether over a beer or at the family Christmas party, politics and policy are what everyone can agree to disagree on. Everyone has their own opinion about how the government should be run, whether on the left or the right, and the usual sentiment is that the current government isn’t running things properly. But with all this rhetoric being thrown around the issue, I decided to read a bit more on it and came across this wonderful little book in the university library.

The main premise is that the current 21st century world consists of multiple interacting systems and networks of people, where power is diffused among them unequally. This include the state itself, as well as corporate and community interest groups.

In its current form, the government assumes hierarchical, top-down responsibility for certain issues, and sets out to use its resources to solve it. That has been the traditional model in which the government has pursued to achieving its goals. What Hubbard et al. are asserting is that this is not an effective means for the government to pursue socioeconomic outcomes. They are saying there needs to be a radical rethinking about the way the government governs, or as its termed “metagovernance”.

With power diffused among various organizations, governments are no longer leaders in the traditional sense but stewards (hence the title) that help guide and steer collective actions to a specific outcome. This means a few things: it calls for a reunderstanding the government’s context within society and the level of communication/collaboration it has with key stakeholders on issues. It also means that governments need to look more at iterative and experimental approaches to solving issues, and using social learning to allow the network to self-govern itself. All of this would mean changing the fundamental structure and operation of the government.

I rated the book a 7/10. I thought the book put forward some really interesting ideas on the way government policy should be enacted. I particularly enjoyed that they did case studies at the end on four separate Canadian issues that really displayed the idea of collaborative decentred metagovernance. This is a very academic book so I would warn against reading this too casually, although its not too long to get through.

It has been interesting these last few weeks as I’ve been really getting into reading about politics and government. Books like these really challenge the notions and thoughts you have about a topic everyone likes to talk about. Would definitely recommend the book if you are interested in government and public policy.